It is always fun when alumni come to town for a visit with their high school band director. So it was when Bob, and his wife Nancy, passed through town on the way back to Louisville and had yet another two-hour breakfast with Director Roger Mills, and his wife Joanne. His reminiscences during this breakfast were enough to make this Spotlight an absolute imperative. 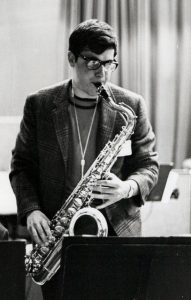 Bob was a member of the original New Trier West Jazz Ensemble beginning way back in 1966. He lived through the trials and tribulations of building a band from scratch. Like several others, during those times, he had no other bands to build upon and became a pioneer of what was to become a formidable, fully integrated, Jazz Program. In Bob’s Senior Year he was selected to be a Student Director and upon his graduation, was awarded the highly coveted American Music Foundation Award, presented for ‘excellence in modern American music,’ and ‘for providing leadership and inspiration to others.’

Bob has written an autobiography (see website 1969 band) which is well worth reading, but in the discussion that took place at the recent breakfast, he adds a further dimension to his story that demonstrates a lifetime of enjoyment that has its roots during his jazz band days at New Trier West.

Here is some of what he is doing musically within the Louisville area:

Bob currently plays tenor sax in the Indiana University Southeast (IUS) Concert Band, a student/community band. He has been in this band since its inception in 1998. IUS has a growing music department but does not have enough students to fill a concert band. Maybe ten of sixty band members are students. The remaining members are local band directors and folks like him who, as he likes to say, “play well enough not to scare small children, but not well enough to quit my day job.”  He claims this as his musical mantra! IUS is a regional campus of IU, located in New Albany IN, home of Jamey Aebersold, a long time New Trier Jazz fan.

In addition, Bob plays alto sax and clarinet in the Swing Street Big Band, which has fifteen or so gigs/year including a monthly dinner dance gig at a local restaurant.

Bob occasionally subs with the Wednesday Night Band, a rehearsal big band that was started in the late 1930s and has been getting together weekly since the 1960s. He proudly proclaims that they perform literally thousands of big band charts. He emphasizes “Great for sight reading!”

If that is not enough, a few Sundays each month he plays tenor with his church’s Praise Band.

Bob helps manage the Moonlight Big Band, another Louisville area big band. He says they don’t have many gigs these days, but always have a wonderful time when they do get together. This band traces its roots to the 1930s and was started up again in the 1980s. Bob bought the music library from the original band leader in 1991 when that director became physically unable to manage the band. 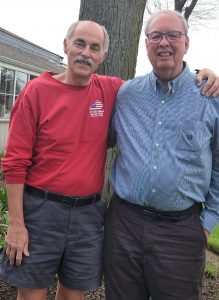 Bob emphatically states that his years in the NTW Jazz Ensemble instilled in him a love for (jazz) music, and especially for big bands/jazz ensembles. Even though music was not his day job, it has always been his passion. Except for a few years after college, he has been playing continuously since the middle 1970s and loving it.

So, there you have it, like other jazz alums, Bob demonstrates exactly what this website is all about. “A Story That Needs To Be Told.”  Please go to the 1968-1969 bands, on this website, read Bob’s autobiographical sketch, go through the Scrapbooks, and listen to his two Jazz Ensemble recordings ( 1968  and  1969 ) made at New Trier West High School.

Want to contact Bob? Simple! Just go to the FAQ/Login/Contact TAB, then choose Contact Us, fill out the form and just say Hi Bob! Your information will be forwarded to Bob, so that he may respond to you.