Part II: From the ground up…a new program was built

During the summer, prior to the 1967-1968 school year, with the help of my mentor, Sam Mages, I began what became a ritual summer jazz ensemble. We practiced Monday evenings from 7:30 pm to 9:30 pm., although rehearsals did go beyond that, again with no complaints from the participants. The summer program was also open to students from our sister school, New Trier East. A word of explanation about that surprising development. New Trier East had, for many years, a ‘Stage Band.’ Although their ‘Stage Band’ performed at a proficient level, it was different from our evolving program in several ways. Most important was their choice of music, which was more attuned to music of the past, with little or no instruction in music improvisation. Their students worked hard, but performances were limited to several times a year.

About six of the East students joined with the West students to make a surprisingly well-balanced jazz ensemble. A subset of East students joined with some West students to begin learning more about music improvisation. This occurrence was the beginning of a more serious study of music improvisation. I discovered, what I was completely naïve about: few students owned a jazz recording, didn’t listen to jazz, didn’t listen to jazz performers, or for that matter any performers who played the instruments they were trying to learn. That had to be rectified and, to that end, I went out and purchased a portable ‘record player’ and began bringing in recordings of great performances.
I also made note to begin figuring out how to get the music room wired for sound. Imagine a music room without the ability to play a recording.
After that, it was a whole new ball game. Lesson learned, “if you want your music students to learn something, at least explore with them that which has already been achieved by others.”

In August 1967, prior to the beginning of the last school year for NTW’s first graduating class, I accompanied a group of ‘jazzers’ to the National Stage Band Camp held at Indiana University.

Upon return I wrote a letter to the parents memorializing events at the camp. I commented that there was a daily class in music improvisation. More importantly, I wrote “the ideas absorbed will no doubt permeate our study of improvisation this upcoming year.” That written statement imprints, for all time, the importance that music improvisation played, not only in my own teaching, but throughout the musical output of every jazz band I directed. I continued in that letter, by writing:
“I think our students, and you, the parents, should be aware that music, all music, is becoming to them an area of excitement which will continue always.”
Personally, I am immensely proud to have made that observation and in retrospect know that this is one of the lasting outcomes of the entire program. Want more proof? Read their autobiographies on this website!
Note: The previously referenced letter is included, in entirety, in the 1966-1968 NTW Jazz Scrapbook.

The 1967-1968 school year began with my first music department meeting. It was time to start welcoming the students back into 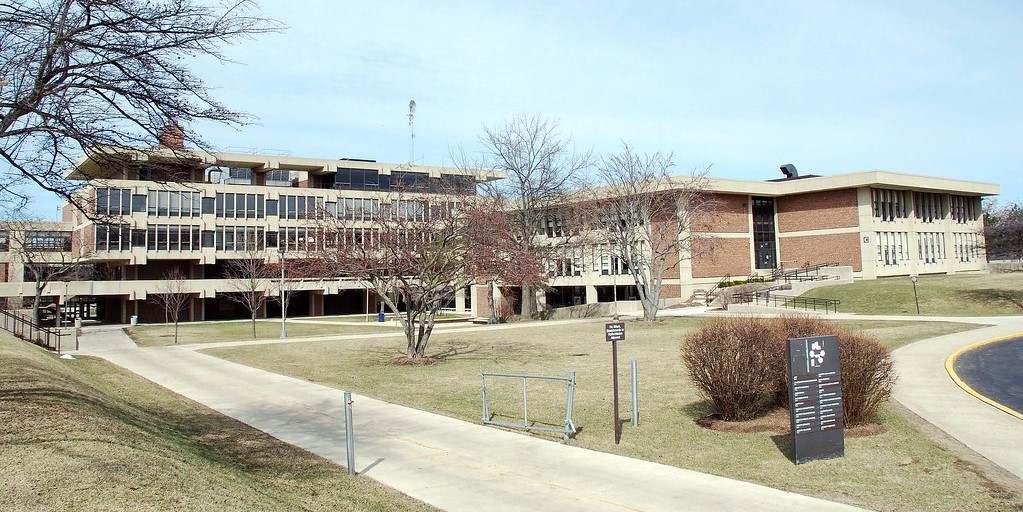 the academic world at New Trier. And the ‘musicians’ just couldn’t wait to say hello to the ‘Coach.’ They incredulously wanted to know when the first jazz practice was scheduled. And, at this point in time, Jazz Ensemble was not accepted as a curricular subject. During these early years, the Jazz Ensemble practiced after school, bumping heads with club activities and sports.
Now, as an aside, our sister school on the East campus had their ‘Stage Band’ scheduled within the curriculum. Not so on the newly built West Campus.

I had always believed that music was an academic subject worthy of equal treatment within a school curriculum. I was absolutely determined that the Jazz Program would, at some point, be given curricular status along with everything else that paralleled the other curricular courses. And that, in my mind, included academic credit! This became a goal of mine from the very beginning.
But to answer the question, I said we would meet three days a week after school. And guess what, not a single complaint! These students wanted to continue the path begun during the previous year. I don’t suppose that it had anything to do with the all-girl-jazz-groupies that followed the trumpet section. Yes, the Jazz Ensemble had built the basis for a large following this year.
Regular school appearances took place, and many students would appear at our various functions. 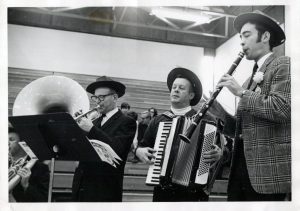 Also, a few Saturday rehearsals were scheduled, again with enthusiasm from the ‘musicians.’ However, an unexpected set of circumstances arose during the year. A few parents contacted me about the amount of time their children were spending in jazz band and had a concern that their grades were suffering. A valid complaint, I thought, and one that needed to be addressed. Not to let those concerns go without proper response, I began tutoring ‘academically deficient’ band members in their various subjects. Algebra and Geometry were a natural, since I also held a degree in mathematics, but English, Science, and Business Law, as I remember, became topics that were also included. I do remember helping with advice on a few term papers. Anything for Jazz! The progress continued, and many parents became endeared with the ‘Coach.’ And by all appearances I was still young and energetic. All attributes that helped the cause! All was good!

In February (1969) the Jazz Ensemble participated in the Oaklawn Community High School Stage Band Festival. It needs to be noted that the only group with the ‘Jazz Ensemble’ designation was the New Trier West Jazz Ensemble. This was the beginning of many schools following our lead in renaming their ‘Stage Band’ to Jazz Ensemble. When I originally named New Trier West’s jazz band, Jazz Ensemble, I was looking to align the name more closely with the expanding instrumentation and music of the times. It clearly stuck and today the name is routinely found in virtually all academic institutions. It was among the ‘firsts’ for New Trier West, but hardly the last. The blank instrumental music palate, provided by a newly constructed school, was slowly being sculpted in a way that my students and I, and their parents, were completely in sync: lock, step, and barrel!

Shortly thereafter, in April, the Jazz Ensemble participated in the Mundelein High School Festival of Jazz. A competition we didn’t win, at first, but in actuality did. Through an addition mistake, by the judge, our group came in second. Eventually the mistake was corrected and several weeks later it was agreed (actually negotiated) to call it a tie, so as not to upset the members of the other band involved. Bruce (now Bill) Sweet (one of our drummers) wrote a student’s viewpoint of this weird occurrence. (See the 1968 Yearbook’s Scrapbook).

Later, during this school year and following in the prioritized direction toward music improvisation, a friend, author, and award winner, Jamey Aebersold appeared, in concert, with our jazz ensemble. It was an inspiring time for all my students. He worked and performed with the band and along the way made a couple of lifelong friends. To me, it was another step following my goal to have a Jazz Curriculum of which the Jazz Ensemble itself was just one part. Yet to come was the creation of the ‘Creative Jazz Ensemble’ and the ‘Neophonic Jazz Orchestra.’ Other parts of a Jazz Ensemble Program would later include student compositions, students learning through teaching, providing help to other jazz educators, developing a ‘feeder’ system’ for the jazz ensemble, regular summer involvement, and a bunch of other things, that came about, not to mention learning what it’s like to perform ‘on the road.’

It was also during this period of time that Charles Suber, then publisher of DownBeat Magazine, became an interested follower of the program, as well as a personal friend. With his help, over the next several years, The New Trier West Jazz Ensemble became ‘a force’ that caused many educators, throughout the country, to take note. With DownBeat Magazine’s involvement, the New Trier West Jazz Ensemble became involved in a variety of ways that helped change the direction of jazz education nationally. Many articles written by Charles Suber, in Downbeat, told ‘Our Story’ with clear definition. More will be written about this as my story unfolds.
So here I was, at the end of the 1967-1968 school year, returning from NTW’s first graduation with tears in my eyes. A new experience for a new teacher: saying goodbye to the students who did all the ‘trench work’ for the development of what was to become a formidable Jazz Studies Program.

But one thing is true: it all starts up again, as it does every school year, with a new group of musicians (I always referred to them in that regard) and a renewed commitment to become better. And my evolving definition of the ultimate purpose of all of this was “to learn how to learn!”