‘A Story That Needs To Be Told’

Soundtracks had its origination, on the newly constructed New Trier West High School campus, in 1966, with a single tape recorder, a single microphone, a Sponsor, Samuel A. Mages, and an eager new faculty member, assistant, Roger B. Mills. 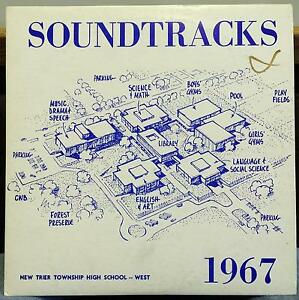 The formation of a club called ‘Soundtracks,’ was originally made up of students who were interested in learning how to record and in recording many school events. In 1967, the first ever recording, produced by Soundtracks, was produced.

In the beginning, all the equipment, basically a tape recorder, and lots of cords, were locked up in a little closet, and every time an event was to be recorded, members had to dig through a mass of cords to find what was needed. Theft became a problem, too. So, the idea was born to convert one of the practice rooms into a recording control room where all the equipment could be permanently set up.

In 1975 Soundtracks Members, Roger Mills, and Charles Hawes, a freelance recording engineer, worked to knock through a wall in a rehearsal room, into the practice room, and build the first ever recording studio at New Trier West High School.

It became an elaborate recording studio which was used in recording rehearsals, concerts and other school functions.
The building of this Recording Studio was initiated in clear response for the need to produce higher quality recordings of the various programs presented by the music department. As it became clear that something better was needed, new and higher quality recording equipment was added. The Soundtracks recording studio grew not only because of the need for better quality, but because a larger number of students became interested in this activity.

This recording studio project was not such a simple one. The remodeling involved knocking out part of the wall, adjoining a rehearsal room, in order to put in a window and a multi-microphone connector panel. The window itself was made up of two panes of glass, 1/2″ and 3/8″ mounted, at an angle, and sealed in rubber insulation. Communication facilities, between the control room and rehearsal room, were installed, and the control room itself was acoustically well isolated.

This set-up became much more ideal for taping rehearsals (providing good practice run for student recording engineers), but there were still problems recording the concerts, because all the equipment had to be carried downstairs to the auditorium location, for concerts. So, the next step was to connect the auditorium stage area to the third-floor control room with microphone cables. A case for this was made on the basis of the problems of moving all the equipment back and forth, of having it located in the way during programs, and because by this time there were about thirty students actively involved in Soundtracks.

Although Soundtracks drew most of its members from the music department, attempts were made to ensure that students, from outside the music program, could be involved in the group. Plays, lectures, interviews, and other events were recorded, in addition to the music department concerts.

With all this recording activity going on, it was soon realized that it would be impossible for the Sponsor, at that time Roger Mills, to be around all the time. So, an organization was created which put several key students in charge of the daily operation of the recording work. A checklist was developed, and when a student passed certain criteria, he/she becomes was promoted to a “recording engineer” and was allowed to operate the equipment without supervision. Early on there were three recording engineers in Soundtracks (because of the size of the NTW Jazz Ensemble Program there was one person who was promoted to oversee just that area).

A new subset of Soundtracks, called Jaztrak was begun in 1973. Organization continued and each

of the recording engineers was put in charge of four “recording technicians” (who were generally younger members), and they were expected to teach the technicians everything that they had learned. The technicians, in turn, worked with several less experienced students (the beginning staff) and taught them the basics of the recording studio. At each event that was scheduled for recording, there was an engineer, a technician and several staff. So, the learning process continued, and the students were able to develop a sense of responsibility.

There was great deal of money spent on equipment, and it became necessary for Soundtracks/JazTraks to become involved in fund raising. One effective method to help raise money was to tie the fundraising into a preexisting activity, that of producing phonograph records. Several records were produced each year and the profits went back into the purchase of newer equipment, so that the studio was continually upgraded. In 1980-1981 the name was officially changed from Soundtracks to Soundtraks, aligning the name with its subsidiary Jaztrak. 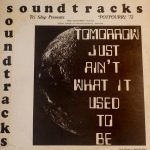 The long-term idea was to expand into the area of television. Eventually, the capability to videotaping programs was envisioned. The necessary cables and lines connecting the recording studio to the auditorium stage was installed but the expense of purchasing video equipment required larger amounts of money and remained in the planning stages.

In the middle of all of this, it was announced that New Trier West High School was to be closed and the two schools merged into one New Trier, on the Winnetka, Il. campus.

Since there was no recording studio located on the Winnetka campus, and no Soundtraks, Roger Mills, and the student membership, began designing for a new, to be constructed, recording studio. Once again, state of the art design was to be utilized. The new Soundtraks recording studio was completed in time for the opening of the 1981-1982 school year. This time silver wire was utilized in the connections between the various rehearsal rooms and the auditorium. It was designed for the digital future and for TV. So, once again, a proud New Trier West High School organization was reborn. Always proud of its ability to memorialize New Trier’s greatest moments, its musical productions, plays, and other special moments. Student leaders from Soundtraks now began having classes for not only new students, but also for interested students that previously did not have a recording studio at their school.

Subsequently, the entire music building was torn down, rebuilt, and yet another Soundtraks studio built. And, although it was lost in the transition to one high school, in 1981, it needs to be affirmed that the newly designed Soundtraks was established at the new school, by the New Trier West High School members of Soundtraks and their sponsor, Roger B. Mills.